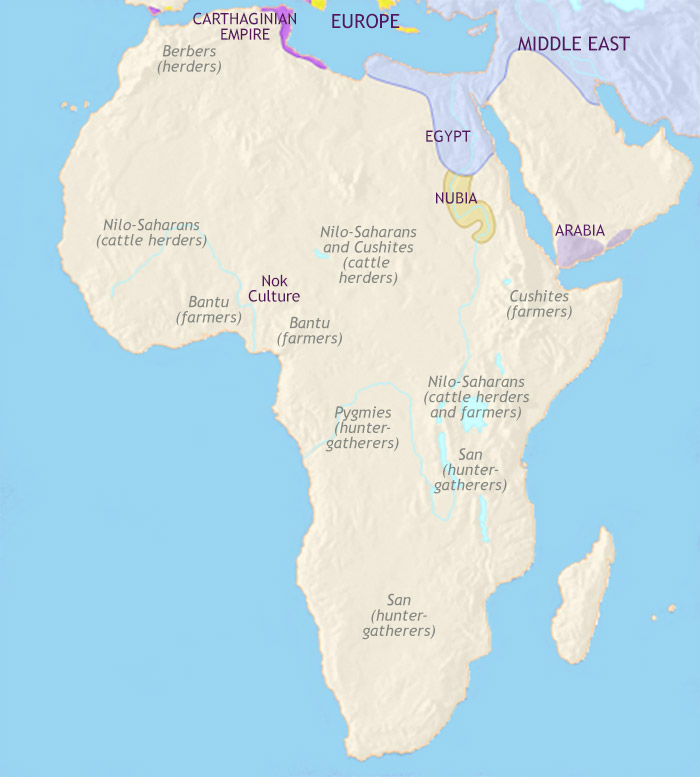 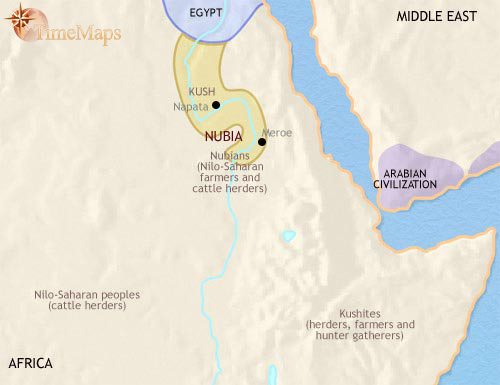 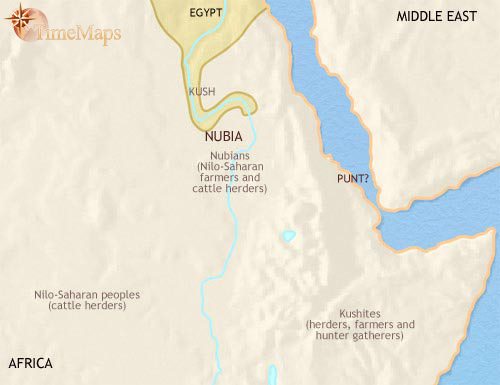 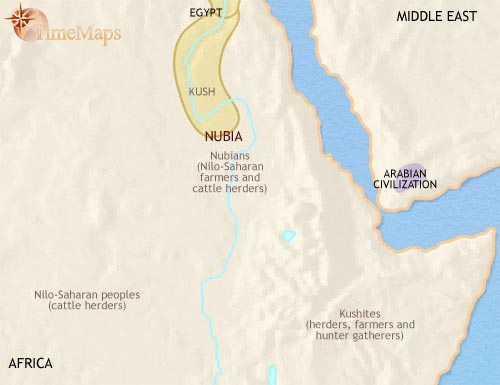 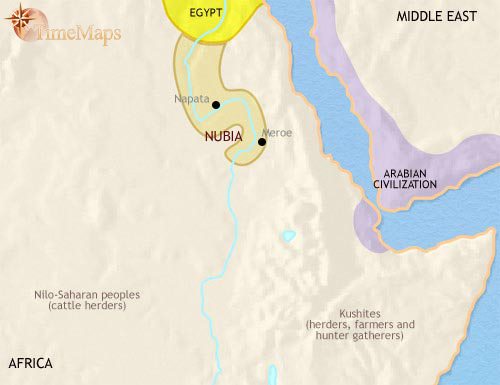 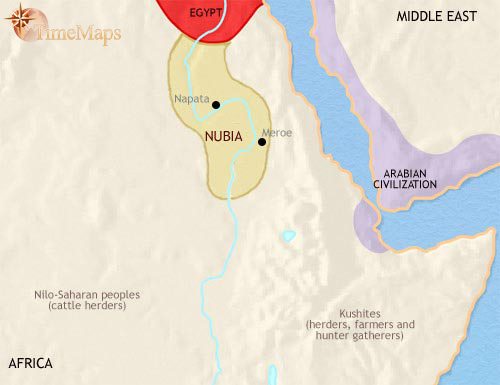 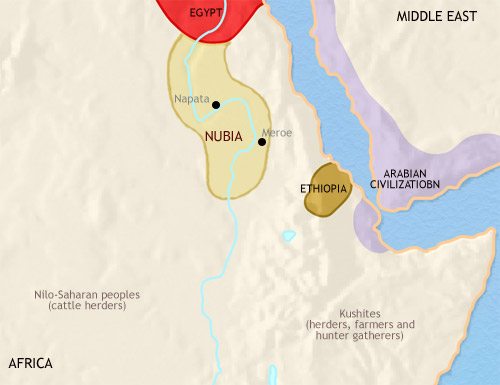 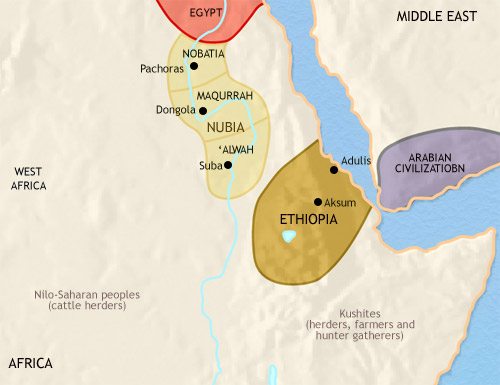 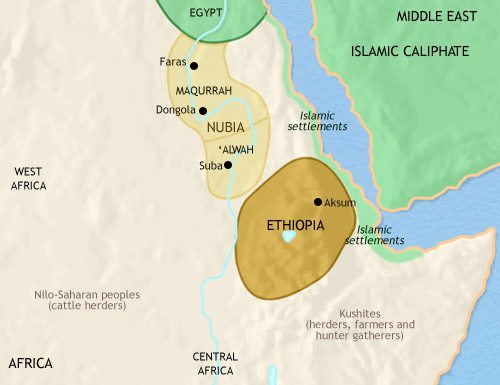 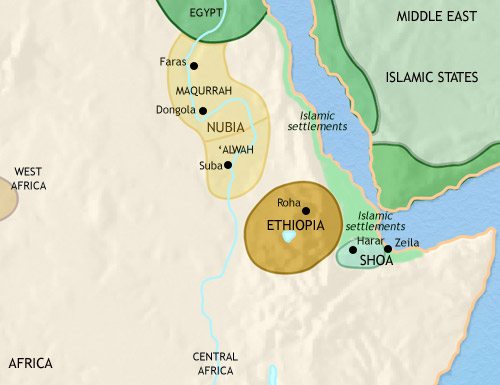 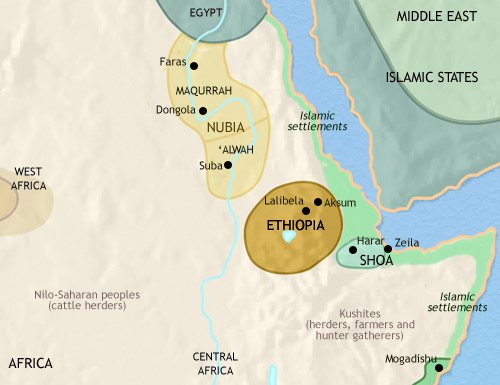 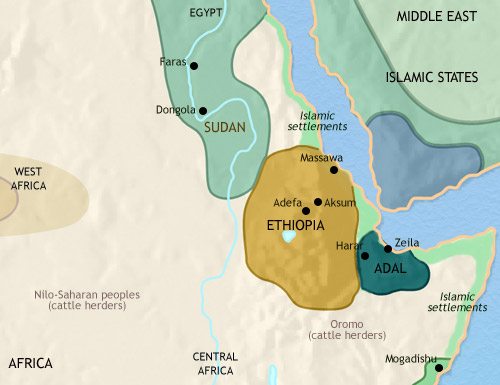 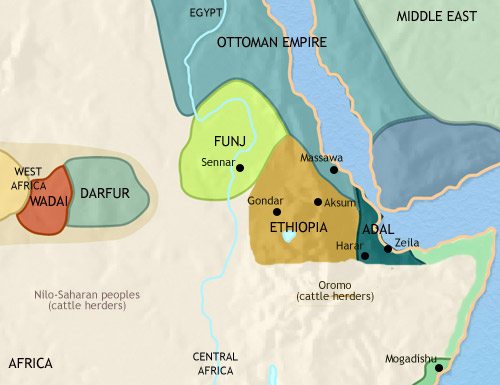 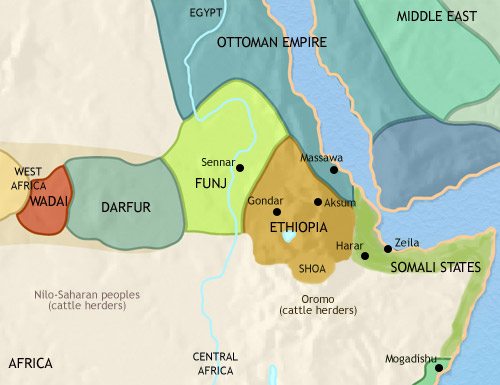 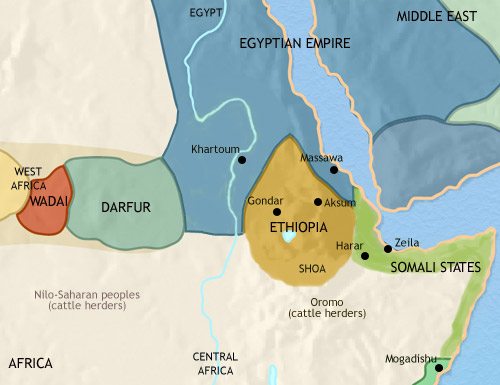 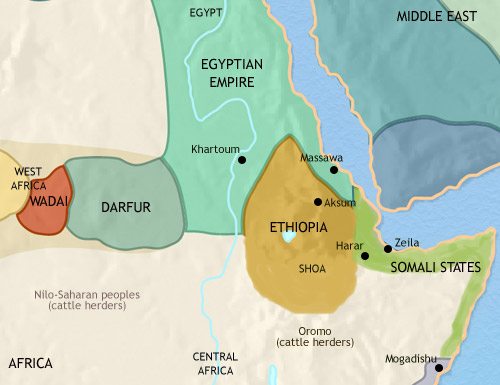 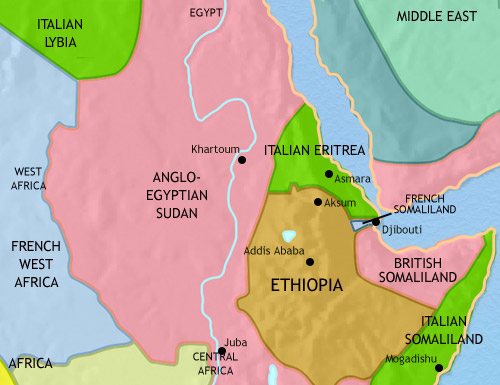 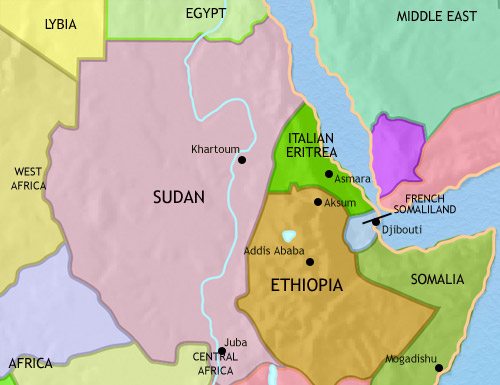 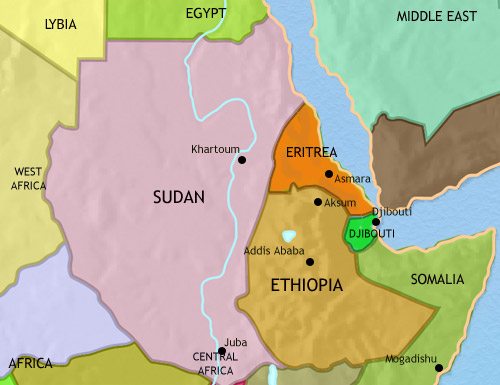 What is happening in North East Africa in 500BCE

For the past five centuries Nubia has been home to a powerful kingdom, Kush. In 730 BCE the king of Kush conquered Egypt, founding the 25th dynasty of pharaohs. This line of Nubian pharaohs lasted for about 60 years before being driven back into Nubia by an invasion from Assyria (670 BCE).

In Nubia they have continued to rule a powerful kingdom, at first based on Napata, the old capital, and then, after 593 BCE, when Napata was sacked by an Egyptian invasion, at Meroë, in the south.

The ruling class of Nubia remains notably Egyptianized. The kings continue to call themselves Lords of Upper and Lower Egypt, the traditional titles of the Egyptian pharaoh. The court continues to use the Egyptian language and script, and Egyptian gods are worshipped in the Egyptian-style temples. The move south to Meroë, however, symbolizes Nubia’s growing freedom from its past as its civilization begins to develop in its own distinctive way.

What is happening in North East Africa in 1500BCE

For centuries, the land of Nubia has been coming increasingly under the influence of its great northern neighbour, Egypt.

When Egypt has been united and powerful, this influence has taken the form of outright conquest, at least in the north of the region. Egyptian colonies have been planted along the river Nile, and the outlying tribes, herding their cattle on the grasslands away from the river, have owed a loose allegience to the Egyptians, and traded with the Egyptian merchants in the towns.

On the other hand, when Egypt has been weak and divided, an independent state has flourished in Nubia, the kingdom of Kush. The Kushite ruling class, however, has become heavily Egyptianized in culture, religion and material civilization.

What is happening in North East Africa in 1000BCE

During the period of the New Kingdom in Egypt, much of Nubia came under the direct rule of the Egyptian government. Egyptian colonies, trading posts and garrisons were established, from which the Egyptians exercised a tight control over the country.

The chiefs of the pastoral tribes which roamed the grasslands away from the river were given Egyptian titles and became client princes in an Egyptian-controlled system of indirect rule.

A major purpose of this system was for Egypt to control the valuable mines and trade routes which ran through this region.

With the decline of Egyptian power in the past couple of centuries, Nubia has become the seat of the independent kings of Kush, with a court and culture very similar to that of their northern neighbours.

What is happening in North East Africa in 200BCE

In Nubia, Egyptian cultural influences are beginning to weaken, and a distinctively African civilization is beginning to emerge.

Meroe, the new heartland of the kingdom of Kush, is far enough south to receive tropical rains in the summer, and crops of sorghum and millet can be grown without the need for irrigation. A mixed agriculture of crop-growing and cattle-rearing flourishes well beyond the near confines of the river Nile, and forms the economic base of the Nubian kingdom.

In other ways, too, Nubian culture and society is moving away from Egyptian models. The local language has replaced Egyptian at court, and an alphabet (as yet undeciphered) has been developed for it. In religion, the Nubians are adding their own gods, notably the lion god, Apedemek. In art, Nubian motifs are becoming more important, with African animals playing a larger part, and in architecture, the kings are being buried under distinctive Nubian-style pyramids – centuries after the last pyramid was built in Egypt.

What is happening in North East Africa in 30BCE

The land of Nubia has benefited from the expanding economies of the Middle East and Mediterranean.

Both the trade northward along the river Nile to the Mediterranean, and the Red Sea trade to India, has grown. Nubia’s trade goods are ivory, leopard skins, slaves, ostrich feathers, ebony and gold. The sources of this trade, hunting and mining, and the trade itself, are under the direct control of the kings of Kush, and their kingdom is reaching a height of its prosperity.

Despite some hostilities with the Romans as they take control of Egypt from the Ptolemies, the kingdom of Kush is set to continue to flourish.

What is happening in North East Africa in 200CE

In Nubia, the kingdom of Kush has retained its independence from the Roman Empire, despite a couple of Roman incursions into the country under the early Roman emperors. Now, relations are good and trade is flourishing.

The kingdom grew in power and wealth, and reached a peak of prosperity under king Netekamani (12 BCE – 12 CE). By this date, however, its economy is probably in decline. Its international trade based on the Red Sea routes is losing out to the rising power of Aksum. At home, deforestation, due in part to the large iron industry’s demands for wood fuel, is reducing soil fertility and undermining settled agriculture; semi-nomadic cattle herders are becoming more populous and spreading over a wider area. Also, the growing shortage of trees is affecting the iron industry itself.

After more than a thousand years, the kingdom of Kush is coming to an end and Nubia is entering a new phase.

What is happening in North East Africa in 500CE

In Nubia, the centuries-old kingdom of Kush has vanished; three kingdoms have emerged to succeed it: Nobatia, Maqurrah and Alwah.

In Ethiopia, the kingdom of Aksum has become a powerful state. It has also become a Christian one, converted by monks from the Byzantine empire. Ethiopian Christianity is centred around monasteries, which will play an enormous part in the cultural and political life of the country. Shortly after this time, the Ethiopians briefly control the south-western parts of the Arabian peninsula, before being driven back across the Red Sea by the Persians.

Aksum, and its port Adulis, on the Red Sea coast, are flourishing centres of trade; at this time Aksum apparently dominated the maritime trade coming up the Red Sea from India and the East.

What is happening in North East Africa in 750CE

By the mid-8th century, Ethiopia is in decline. Her once flourishing trade is being strangled by the rising tide of Islamic commerce; the seas and coasts have become a hostile environment to this Christian people. It is also possible that over-grazing and soil erosion were reducing the prosperity of the central core of the kingdom.

As a result of these factors, the focus of Ethiopian society has shifted south, further into the central highlands. This development has increased the isolation of Ethiopian civilization.

What is happening in North East Africa in 979CE

The Christian kingdoms in Nubia and Ethiopia have become increasingly isolated outposts of Christianity, entirely cut off from other Christian nations by Muslim territory.

Nevertheless, the Nubian kingdoms have generally peaceful relations to Muslim-ruled Egypt to the north. A lively trade exists between them, supplying the Muslim world with the age-old commodities of central Africa, including ivory, ebony and slaves.

In Ethiopia, the inhabitants also face fierce and unrelenting pressure from the pagan peoples on their southern borders.

Within Ethiopia, a powerful landed aristocracy owns most of the land and controls the lives of the peasantry.

What is happening in North East Africa in 1215CE

In Nubia, the long-lasting peace between the Christians and Muslim Egypt is beginning to break down. This will spell disaster for the Christian kingdoms.

In the 11th century Ethiopia experienced intense political instability. In one incident, a princess murdered all the royal family – except the infant king, who was smuggled out of harm’s way. Shortly after this shock, a new line of kings, the Zagwe, took power from the old Aksumite line. They have firmly established their power in the country. They are centralizing their authority by replacing traditional tribal rulers – who owed only a loose allegiance to the king – with royal governors appointed by themselves.

Economically, Ethiopia’s fortunes have risen. With economic revival in Egypt has come expansion for Ethiopia’s trade: the country is one of the major sources of frankincense and myrrh, two spices much in demand in the Muslim world, and it also exports slaves to the north.

The current king, Lalibela (c. 1200-1250), is famous for building a series of unique churches hewn out of solid rock near his capital (also now named Lalibela).

A strong Muslim state has developed to the south-east of Ethiopia, based on trading posts from which control over the local population has gradually been achieved.

What is happening in North East Africa in 1453CE

In the 13th and early 14th centuries the Christian Nubian kingdom of Maqurrah was overwhelmed by the inflow of Arab tribes, ejected from Egypt by its Mamluqs rulers. The conversion of Dongola cathedral into a mosque (1317) symbolized this process. These tribes have continued migrating south and west, pushed on by the expanding power of the Mamluqs to the north.

Under the Zagwe kings, the Ethiopian empire expanded, its formidable army winning territory from the surrounding pagan tribes. Christian Ethiopian colonists were planted in the newly-conquered lands, and new monasteries founded in these areas, bringing with them Ethiopian culture. In 1270, however, the Zagwe line was replaced by the Solomonid dynasty.

A new, militant Muslim state, the sultanate of Adal, has become the centre of Muslim expansion in the region, spreading the faith amongst the Somali pastoral tribes. This period has seen a gradual escalation of fighting between the Muslims, and by now the two powers are in a state of near-constant warfare.

What is happening in North East Africa in 1648CE

A pastoral people of the eastern savannah, the Funj, have conquered a large kingdom in the Sudan. At this time they are converting to Islam. The Ottoman empire has occupied northern Nubia as well as some of the Red Sea coast.

During the 16th century royal authority in Ethiopia was weakened by the growing regional power of governors, who are, by now, virtually independent princes within their domains. Then Adal, with a force armed with firearms acquired from the Turks, attacked the Christian kingdom, shattering what remained of its cohesion. The Ethiopian emperor appealed to the Portuguese, who sent a small army and, together, the Portuguese and Ethiopians managed to defeat Adal’s forces. The Ethiopians went on to recover most of the territory they had lost.

Meanwhile, the Oromo people were moving into the country from the south. They are cattle herders who, in search of new grazing lands, are taking over the areas no longer controlled effectively by either Christian or Muslim rulers. The southern halves of Ethiopia and Adal were soon overrun by the Oromo. With effective royal power now confined to an area around their capital of Gondar, the Ethiopia emperors can do little to stem the Oromo tide.

What is happening in North East Africa in 1789CE

What is happening in North East Africa in 1837CE

What is happening in North East Africa in 1871CE

What is happening in North East Africa in 1914CE

What is happening in North East Africa in 1960CE

What is happening in North East Africa in 2005CE

Iran, the centre of the great Persian empire

Its ancient glories now in the past, Egypt is now just another province within the Persian empire