Information regarding the Islamic Caliphate.

Decline of the Caliphate

The Arab word caliph or khalifah) means “successor”. This refers to the fact that, after the death of Muhammad, the rulers of the Islamic community were the “successors of the Prophet”. They presided over dramatic conquests which brought into being one of the largest empires seen in world history. It was centered on the Middle East. This empire is known to history as the Caliphate, and under it, a distinctly Islamic civilization emerged in the Middle East, North Africa and beyond.

The founder of Islam, the Arabian Prophet Muhammad, died in 632. His successor, the first caliph, was elected in that year.

Several dates can be used to mark the end of the Caliphate; however, it is usually regarded as coming to an end in 1258, when the last of the caliphs was killed when the Mongols captured Baghdad. 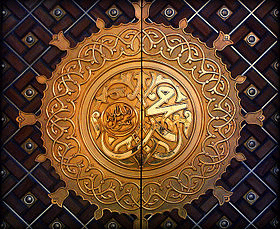 Throughout Islamic history various other Muslim rulers have claimed the title of caliph, but it is the original Caliphate of the first centuries of Islamic history which will be the subject of this article.

The prophet Muhammed had selected the city of Medina as his capital, and it was here that he died. It was here too that the leaders of the Muslim community elected as his successor (caliph) Abu Bakr, Muhammad’s father-in-law and one of his leading lieutenants.

Abu Bakr (reigned 632-4) took the title “commander of the faithful”, which was held by all his successors. On his deathbed he nominated Umar ibn Khattab as his successor (reigned 634-44), and when Umar was assassinated, a council of Muslim leaders elected Uthman Ibn Affan (reigned 644-56). After Uthman’s murder Mohammed’s son-in-law Ali seized control of the Caliphate and reigned until 661.

The first four caliphs are known to Islamic history as the “rightly guided caliphs”. They were all closely related to Muhammad, and were known for their personal qualities of leadership and of Muslim piety. During their reigns, despite the challenges and instability that they had to deal with, the Caliphate grew from being a purely Arabian power into the largest empire world history had seen up to that point. Its armies seized the richest provinces of the Byzantine Empire, Syria and Egypt, and conquered the whole of the great Sasanian (or Persian) Empire in the east.

The actions of the last of these caliphs, Ali, plunged the Muslim community into civil war, which ended with the governor of Syria, Mu’awiyah, gaining the rulership. Mu’awiyah turned the Caliphate into a hereditary monarchy, in the hands of his family, the Umayyad dynasty.

Under the Umayyads (reigned 661-750), the capital of the Caliphate was moved from Medina in Arabia to Damascus in Syria. The empire continued to expand vastly, taking in North Africa, most of Spain and much of Portugal, Transoxania in central Asia and western India.

Eventually this expansion came to an end: the failure of a second Muslim siege of Constantinople (717-8) marked the end of serious Arab attempts to conquer the Byzantine Empire; the defeat of an Arab army at the battles of Tours (732) saw the tide turn against them in western Europe; repeated and costly failures to subdue the steppes led to the fixing of the Caliphate’s central Asian borders in Transoxania; and the mustering of powerful Indian armies against the Muslim invaders in the subcontinent led to Islam being confined to the north west for centuries to come.

Coin of the Umayyad Caliphate

Despite these setbacks to their universalist ambitions, the Umayyad caliphs ruled a vast state, one of the largest empires in world history. This expansion caused severe stresses within the empire. Regional populations which had for centuries viewed each with hostility now found themselves living within the same political system. Administrative structures had to be hurriedly put together to govern the millions of new subjects, and this was only possible through the continuation of functioning bureaucracies taken over from the Byzantine and Persian empires. These factors made for regional friction between the Greek-speaking west and the Persian-speaking east.

At the same time, although Muslims were for long a small minority within a non-Muslim population, their numbers were growing strongly and this led to tensions between Arab Muslims, who regarded themselves as the ruling class, and non-Arab Muslims. Feeding into these tensions were sectarian quarrels between different branches of Islam. It was at this period that the split between Sunni and Shi’ite came into being, when the Shi’ites rejected the legitimacy of the Umayyad caliphs, believing that the Islamic world should be ruled by the descendants of Ali, the last of the Rightly-Guided Caliphs (see above).

In 747, a revolt broke out in the eastern parts of the Caliphate and soon had expelled the Umayyad forces from Iran and Iraq. In 749 the rebels recognized Abu al-Abbas, a descendant of Muhammed belonging to a rival clan to the Umayyads, as caliph. In early 750, at the battle of the Zab, the Umayyad army was defeated, and by the end of the year the Abbasid forces had control of most of the Caliphate. All surviving members of the Umayyad family were tracked down and killed. Only one survived, fleeing to Spain where he founded an independent emirate (which later became the Caliphate of Cordoba).

The Abbasids (reigned 750-1258) first chose Kufa, an Arab colony in southern Iraq, as their capital. In 762, however, the new regime founded the city of Baghdad, also in southern Iraq but near the Persian border. The building of this new city marked a shift in power and status away from the descendants of the original Arab conquerors to the growing class of non-Arabs within the Muslim community. This group had felt themselves to be second-class citizens within the Muslim community under the Umayyads, and many had given their support to the Abbasid bid for power. 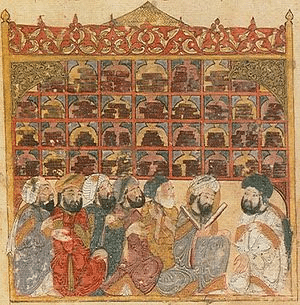 The House of Wisdom

The Abbasid period was noted for great achievements in science, mathematics, medicine, astronomy, philosophy and other branches of  knowledge. Baghdad in particular, as well as becoming one of the largest cities in the world at that time, was a famous centre of learning. Successive Abbasid caliphs patronized an organization called the “House of Wisdom”, which would in modern parlance be called a research institute. Continuing a tradition of Persian cultural fusion which began during the Sasanian period, its scholars sought to synthesize knowledge culled from different parts of the world, especially ancient Greece and ancient India (particularly the advances in mathematics and science made in the period of the Gupta empire.) Building on these foundations, Arab scholars make new advances of their own in numerous branches of human knowledge.

Decline of the Caliphate

The Caliphate was a vast empire, and, long before the telegraph and railway, holding it together as a single political unit was always going to be a huge challenge. Things were made no easier by bitter factionalism at court, violent tensions between sunnis, shi’ites and members of other sects, and the rise of slave armies who, though originally recruited to be entirely loyal to the caliph, soon became an independent and corrosive force in the power politics of the empire.

Almost as soon as the Abbasids had taken over from the Umayyads, the Caliphate began to fragment. Spain fell to a surviving member of the Umayyad clan, and owed only loose allegiance to the Caliph in distant Iraq. Elsewhere, governors drifted out of the control of the court in Baghdad.

Shia Islam – Example of mirror writing in Islamic calligraphy. “Ali is the vicegerent of God”

Increasingly they governed their provinces as independent rulers. Fathers passed their governorships on to sons like hereditary monarchs; they raised their own armies, and in due course even stopped forwarding taxes to the capital. Regional dynasties began to develop from the later 8th century, in North Africa first, then in North West India, in Egypt, Iran, central Asia, and Syria.

The Abbasids had been supported by many Shi’ites in their rise to power, but after their victory had the reaffirmed their support for Sunni Islam. Shi’ites throughout the Caliphate felt badly let down by this, and some of these local dynasts were Shi’ites whose recognition of the Abbasid caliphs was lukewarm at best. In some regions, particularly North Africa, sectarian movements (for example the Almoravids and the Almohads) seized control, completely rejecting Abbasid rule. Here also the Shi’ite Fatimid movement originated before conquering first Egypt, then Syria and western Arabia. The Fatimid rulers saw themselves as rival caliphs to the Abbasids, and their avowed aim was to replace them as rulers of the entire Muslim world.

In the 10th century a tribal group from northern Iran, the Buyids, swooped on Baghdad and more or less confined the caliphs to a ceremonial role while they wielded effective power.  Then, in the 11th century, a Turkish tribe called the Seljuqs, who originated beyond the borders of the Caliphate but who had recently converted to Islam, conquered most of Iran, Iraq, Syria and much of Anatolia. They created an empire of their own, whilst still retaining the caliph in Baghdad as a shadowy figurehead. Real power lay with the Seljuq sultan. Later, after Seljuq power fell into decline, Turkish leaders from central Asia – Mahmud of Ghazni, the Khwarizm Shah – carved out large new empires for themselves in Iran and Transoxania.

The late 11th century saw the start of a series of military expeditions from Christian Europe, known as the Crusades, to capture Jerusalem and what is today Israel and Palestine for Christendom. The First Crusade (1095-99) succeeded in capturing Jerusalem and setting up a number of Christian-ruled Crusader states in Syria and Palestine. However, the Crusaders failed to hold on to these gains; Muslim forces retook, first Jerusalem (1187), and then all the territories in Syria and Palestine (the last Crusader stronghold fell to Muslim forces in 1299).

None of these upheavals stifled the cultural progress under the Caliphate. Indeed, as political fragmentation set in and several centers of power emerged in the Islamic world, Muslim thinkers and artists were in increasing demand, and advances in mathematics, science, geography, astronomy and other branches of learning continued to be made.

Neither was the spread of the Muslim faith hindered. Originally a minority religion in the Middle East, by the 13th century the clear majority of the population of the lands of the Caliphate were Muslims. Furthermore, the faith had spread far beyond the Caliphate’s borders, to West Africa, East Africa, the Indian subcontinent and South East Asia. 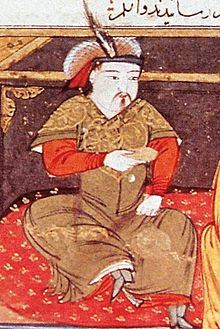 The caliphs of Baghdad experienced one last period of political and military power in the 12th century. As Seljuq power in Iraq fragmented amongst competing regional lords, the caliphs gained control over the areas surrounding Baghdad. This revival did not last long. In the 13th century a fearsome new power from central Asia, the Mongols, conquered Iran, and then Iraq. In 1258 a Mongol army under Hulagu Khan captured Baghdad and sacked the city. The last of the caliphs was wrapped in blanket in his own palace and trampled to death by horses; and the remaining members of the caliphal family were executed.