The history of the world is, in one of its aspects, the story of technology and the impact it had on society. This story starts with humans as hunter-gatherers.

Before the coming of farming, all humans gained their food by foraging for nuts, berries and insects, hunting wild game, large and small, and fishing.

A few hunter-gatherer peoples survive to this day, but the world of the hunter-gatherers, in which most ancient people followed this mode of life, is long gone. It disappeared in the millennia following 10,000 BCE, as farming and pastoralism gradually spread across the world.

The ancient hunter-gatherers lived in small groups, normally of about ten or twelve adults plus children. They were regularly on the move, searching for nuts, berries and other plants (which usually provided most of their nutrition) and following the wild animals which the males hunted for meat.

Each group had a large “territory” over which it roamed – large, because only a small proportion of the plants in any given environment were suitable for people to eat, and these came into fruit at different times of the year meaning a large area of land was needed to meet the food needs of a small number of people. The group’s territory had regular places where it stopped for a while. These might be caves or areas of high or level ground giving them a good all-round vision of approaching animals (and hostile neighbors), and where they would build a temporary encampment. 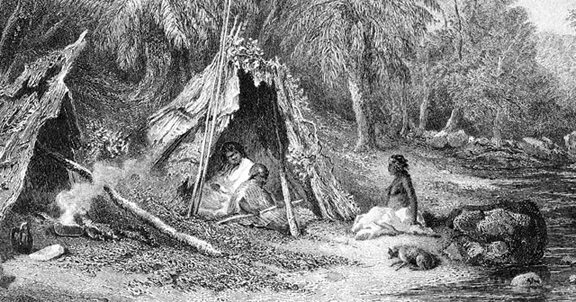 These family groups belonged to larger “clans” of 50 to 100 adults, spread over a wide area and whose members regarded themselves as a “people”, descended from a common ancestor. Kinship was crucially important. This more than anything else gave them their identity and defined their place in the world. More practically, it told them who their friends and allies were, and governed whom they could or could not marry (incest, though differently defined at the margins, was a universal taboo, but marriage outside the clan was also restricted). Myths gave them their world view – how the universe was born, how humans came to be and so on – and there is clear evidence for spiritual beliefs, and indeed for belief in some kind of life after death.

There may well have been individuals within clans particularly revered for their wisdom and judgement, or even credited with special magical powers; but it is highly unlikely that anyone exercised any significant authority over any group larger than the family group. There were no kings or chiefs in such societies. Moreover, the hunter-gatherer style of life prohibited the accumulation of more wealth by some individuals as opposed to others. For a start, there simply was not the necessary abundance of food to create surpluses. Moreover, the collective nature of hunting and foraging, and the reliance members of the group had to place on each other, meant that no one person could take a disproportionate share of the food. As a result, all members of a group shared more or less equally.

This equality in terms of material wealth may well have been reflected in an equality of status between men and women. In modern hunter-gatherer societies, at least, women tend to have a more respected place than is generally the case in traditional farming communities. Perhaps this a reflection of the fact that as the foragers rather than the hunters women provided most of the nutritional needs for the group.

The religious practices of hunter-gatherer peoples must have differed enormously from group to group. Animistic beliefs (in which many features of the natural environment are imbued with spirits) were probably common, and ancestor worship. It should be emphasized, that the concept of “religion” as a separate element of life and culture would have been foreign to our hunter-gatherer ancestors: for them, the spiritual dimension infused all activities, and all things.

The practice of both these religious traditions involves shamans. Shamans may well have been the most respected figures in hunter-gatherer society. Their sphere of activity would have gone well beyond what we consider religious; they would have been healers, judges, perhaps even law-makers and war leaders.

By 10,000 BCE, humans had a range of technologies to aid them in their exploitation of the environment. The most fundamental of these was the ability to make and maintain fire. Fire played an important part in the mythologies of later societies – the Greeks told the story of Prometheus, the great benefactor of mankind, stealing fire from the gods. This suggests that humans invested this capability with great reverence, tinged with fear.

Fire was certainly of enormous significance to their lives. It gave them warmth and light, extending their geographical habitat to the colder latitudes as well as into dark environments such as caves. It enabled them to continue communal life after nightfall, and must therefore have strengthened their ability to tell stories round the hearth – a key element in human culture. Fire allowed people to cook their food, thus expanding their source of nutrition to less digestible or tasty plants. It was also used to harden wooden spears, making it possible to kill larger animals.

The hunter-gatherer people of 10,000 BCE used stone, wood, bone and antlers for their weapons and implements. Some groups practiced primitive mining, or more strictly quarrying, for flint, digging shallow pits and trenches.

People wore clothing made from animal skins, which they sewed together using intricately-crafted bone needles. They had mastered the use of cords and threads fashioned from plant materials to aid them in making their clothes as well as for making baskets. They wove baskets to carry things in.

Their weaponry included spears, bows and arrows, and harpoons. This last brought the food resources of lake, river and shore within their grasp, and indeed coastal peoples ventured some distance out to sea in small boats made from reeds or logs. They had already domesticated one species of animal, the dog (probably around 15,000 BCE), which they used for hunting.

Some societies of 10,000 BCE already had distinctive styles of art. These ranged from crude patterns on their weapons and tools, through modeled clay figurines of animals and women (presumably fertility spirits), to the wonderful sequence of cave paintings of animals and mysterious symbols found in south western France and northern Spain, dating from 35,000 BCE to 9,000 BCE.

The impact of the hunter-gatherer lifestyle on the environment was far less than that of agriculture, but this is not the say that it was non-existent. Unwanted plants were cleared to allow more useable plants to grow, and in some cases whole areas are cleared by fire to allow game to thrive.

In a few favored locations hunter-gatherer peoples were able to establish permanent villages. These were usually on the coast, were communities could exploit abundant year-round marine resources as well as terrestrial plants and animals. Notable examples were to be found in ancient China, Japan and North America. In all these areas some quite large communities of some thousand inhabitants or more were able to develop.

The sedentary lifestyle in such settlements anticipated that of the early farmers. Indeed, some features of farming communities did appear here: the earliest pottery so far found by archaeologists comes from the Jomon culture, in Japan. For most hunter-gatherers, with their more mobile mode of life, clay pots would have been too heavy and fragile to carry.

In the world of 10,000 BCE, a man might live all his life without meeting anyone from another group or tribe. This meant that ideas and techniques spread very slowly, taking lifetimes to travel long distances. This was a world where change was imperceptible. But this did not mean that it was not taking place.

For the advancement of agriculture, see The Coming of Farming

For the origins of the first urban civilizations, see The Origins of Civilization

For the early phase of the Sumerian civilization see Ancient Mesopotamia