A Fashion for Beakers

In the mid-2nd millennium, as a thousand years before, most settlements in western and central Europe continued to be farmsteads, hamlets or small villages. In the Alpine regions, lakeside villages, often with houses on timber stilts, were able to exploit fresh water sources of food as well as land-based plants and animals

But important changes had occurred in Europe since 2500 BCE. At the end of the 3rd millennium, bronze working was introduced from the Middle East. The spreading use of bronze, an alloy of copper and tin, stimulated the development of long-distance trade routes. Copper mining developed in several places in Europe, but it was the rare occurrence of tin which really led to the rise of long-distance trade networks across Europe – tin was mainly found in northern Bohemia or on the Atlantic coast, in northern Spain, western France and southern Britain.

A Fashion for Beakers

Around the middle of the 3rd millennium, a new type of pottery came into widespread use in western Europe. This was the bell beaker, and appears in finds from Spain to Scandinavia, and as far inland as Bohemia. These vessels are often accompanied by such luxury goods as copper daggers and gold ornaments, also recognizable as having a common stylistic origin. The origin of this cultural style may have been in present-day western Spain or Portugal.

The widespread occurrence of these common designs indicates the rise of long-distance trade routes along the Atlantic coastal seaways and down the river routes into the interior of Europe. In the following centuries, along these routes also spread the metallurgy technology of bronze making. 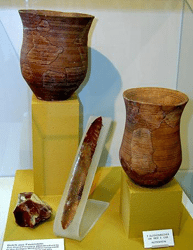 Eastern and central Europe and the Balkans were also covered by a separate network of long-distance trade routes, linking these regions with the Russian steppes in the east. This network gave this vast region a large measure of cultural uniformity. Within it, horse-drawn chariots made their appearance in Europe at this time, and it is clear from the fact that they were buried with their masters, that horses were regarded as high value possessions.

These cultures were undoubtedly those of Indo-European speakers. To what extent Indo-European horse-herders had migrated en-masse into central Europe, or had imposed themselves as a ruling class on the indigenous populations, using their mobility as a military advantage, is a matter for debate.

Whatever the case, the speakers of this group of languages had spread widely over a vast area of Europe. By c. 2000 BCE a branch had migrated down into the Balkans and Greece (becoming the ancestors of the Greeks), and from there into Anatolia (to become, amongst other peoples, the Hittites). Another branch had migrated down into Italy, to become the ancestors of the Italic tribes. And another covered a vast area of northern, central and western Europe, where it was dividing into the Celts, Germanic peoples and Slavs. (Other branches were simultaneously moving into the Middle East and later, India and South Asia, where, with their mastery of chariot warfare, they imposed themselves as ruling classes on local populations.)

All this would have contributed to endemic conflict. Throughout Europe, from east to west, many settlements were being fortified. At the same time, differences in wealth and status were clearly emerging, as the elaborately cast bronze swords, axes and vessels of some graves show. These grave were often located in large mounds which were constructed for just one man (who was often buried with retainers, horses and so on), rather than a whole community. Clearly, this was an age of powerful and wealthy chieftains. 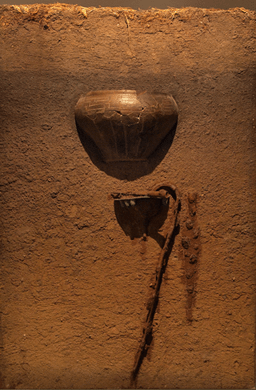 The societies of the Balkans and south west Europe, besides developing their own demand for tin and copper, also benefited from the demand for tin and copper from the advanced Bronze Age societies of the Middle East. Trade routes spread out from Asia Minor into south west Europe and as far as the Balkans, and the maritime trading system of the eastern Mediterranean and Aegean, already noted, expanded.<

Fortified citadels appear in southern Greece and the Aegean, which, judging by the storehouses they encircled, also functioned as centers for the collection, storage and redistribution of trade goods and agricultural surpluses. Craft areas occur within their precincts, and the high quality objects from this period show the level of skill of these craftsmen. What we have here are the bases of powerful Bronze Age chiefs, who live in palace-citadels which are also the commercial, industrial and economic centers of their domains.

These developments seem to have been set back by a long spell of drier weather just before 2000 BCE, lasting some 200 to 300 years (this also affected most of the Middle East). But in around 2000 BCE, the pace of change accelerated; indeed, the first literate civilization of Europe appeared around that time, on the island of Crete. It is clear that the maritime trading system of the eastern Mediterranean had regained its former vigor, and was in fact a great deal stronger. This brought the Minoans of Crete and other Aegean peoples into direct contact with the great Bronze Age civilizations of the Middle East, and resulted in the spread of literate civilization to European shores. Within a few centuries of literate societies and major urban centers appearing on Crete, they had also appeared in mainland Greece and throughout the Aegean (as at Troy).

Continue reading the history of Europe

The History of Ancient Europe: