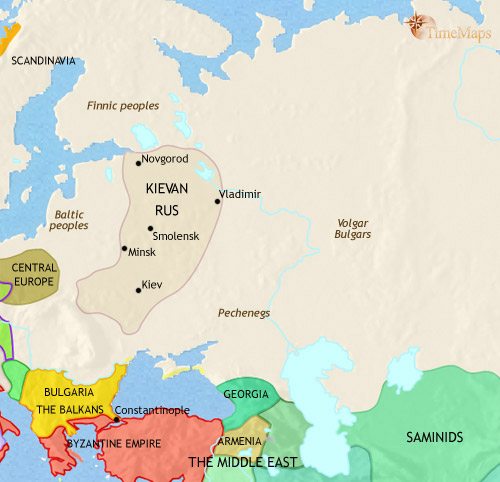 The geographic location of Russia has given it a fascinating place in history. On the one hand, its origins (Slav, Viking, Byzantine) and much of its influences (Polish, Swedish, German, French, even Italian) have been European in their orientation. On the other hand, the country has been greatly impacted by – and has had a huge impact on – the history of Asia. One of its chief historic roles, in so far as world history is concerned, has been to populate Siberia with settled farmers and so put an end to the nomad threat from central Asia.

This dual heritage has created great tensions within Russian society, and has given its history much of its dynamism.

The Russian nation began to take shape in the 8th and 9th centuries CE, when Norse traders established settlements along the great rivers of Russia. In the 10th and 11th centuries these gave rise to a state, the Grand Principality of Kiev, which converted to Christianity at the start of the 11th century. This conversion took place through the efforts of Byzantine missionaries, and was followed by the importing of Byzantine culture – including the Cyrillic alphabet, the revering of icons, and Byzantine styles of architecture – into Russia. As a result of this development, medieval Russia, although a member of the family of Christian countries called Christendom, would never truly belong to medieval Europe, culturally or politically.

In the late 11th and 12th centuries the state of Kiev fragmented into a number of independent principalities. The largest and wealthiest of these was the Republic of Novgorod. This was located in the north, and grew wealthy from its trade with the rest of Europe through the Baltic Sea, based on products of its northern forests, such as honey, furs and wax.

In the mid-13th century the Russian states experienced very destructive raids by the Mongols. These were followed by two centuries of Mongol rule. Most of this time was spent under the control of the western branch of the Mongol Empire, called the Golden Horde.

The Mongol khans did not impose direct rule on the Russian principalities. Instead, they selected one of the princes to act as the go-between the khan and the other princes. As time went by this position fell into the hands of the ruler of the principality of Muscovy, centered on the city of Moscow. These princes used their position to gain more and more power into their own hands, until they dominated the other princes. They annexed the territories of smaller principalities to their own state, bringing them under their direct control.

As the power of the princes of Muscovy waxed, so that of the khans of the Golden Horde waned. Outlying portions of their empire broke away to become independent khanates, while internal instability sapped the strength and cohesion of the Golden Horde. In the mid- to late-15th century the Grand Princes of Muscovy led the other Russian states in a step-by-step assertion of independence from their Mongol overlords.

At the same time, with the fall of Constantinople to the Turks, they claimed the mantle of the Byzantine emperors as the protectors of the Orthodox Church.

Towards the end of the century Muscovy annexed the large state of Novgorod, and completed the annexation of the other Russian principalities. In 1527 the Grand Prince of Muscovy took the tile Tsar of All the Russias. As the word Tsar means Caesar, this was in effect claiming to be the heirs to the rulers of the Roman  Empire.

Meanwhile, Russia had embarked on a massive expansion of territory, especially towards the east, where the weakened remnants of the Mongol Empire offered comparatively easy pickings. To the west was the huge kingdom of Poland-Lithuania, which blocked expansion in this direction for a long time.

Indeed, Polish-Lithuanian raids helped destabilized the Russian state after it had been left weakened by a prolonged reign of terror under the Tsar, Ivan IV, “the Terrible” (ruled 1547-1584). Ivan’s pathological suspicions left the royal family decimated, and the line died out in 1598. A period of anarchy, known as the Time of Troubles, followed, and was only ended when the nobility elected one of their own, Michael Romanov, as tsar (1613).

During this period, the Russian peasantry were gradually relegated to the status of serfs, tied to the estates of the nobility. This situation was formalized by the law code of 1649. This was also the period of rapid expansion into Siberia. This was mainly the work of fur traders and independent Russian freebooters called Cossacks. However, peasant settlers fleeing the more onerous demands of noble masters also settled new lands in the east. Sadly for them the officials of the central government followed in their wake and brought them back into subjection.

The Russians sealed their advance across Siberia in 1689 with a treaty with the Chinese government, setting out a border between the two states which both recognized.

In the following century Russian fur traders crossed the Bering Straits to Alaska, and after trapping and trading expeditions began visiting there on a regular basis, a permanent Russian colony was established there in 1784. This remained very small, however, and relied almost entirely on the fur trade. The Russian claim to Alaska was sold to the United States in 1867.

Returning two the 17th century, Cossacks were also active on the western front, and their leanings towards the Russian Tsar were decisive in the taking of huge chunks of territory from Poland in the mid-17th century.

The end of the 17th century and the start of the 18th century saw the long reign of Peter “The Great” (ruled 1672-1725). This Tsar attempted, with utter ruthlessness and some success, to modernize the Russian state along the lines of European countries further west.  He created a modern, European-style army, navy and bureaucracy. He defeated Sweden and Poland in long wars and thus annexed a slice of the Baltic coast, and on this newly-acquired territory he built a new, European-style capital, St Petersburg. He also expanded Russian territory in the Caucuses and on the Persian frontier.

Peter the Great’s achievement was to turn Russia into a European power. The next notable Russian ruler was Catherine “The Great” (ruled (1762-1796). Under her, the Russian borders expanded still further: victories against the Ottoman Turks brought Russian control to the shores of the Black Sea; further gains in the Caucasus where made; and along with Austria and Prussia, three partitions of Poland first shrank that country drastically, and then eliminated it from the map of Europe altogether. This process brought Russian territory deep into central Europe. At home, her policies favored the nobles at the expense of the central bureaucracy and “new men” whom Peter and his successors had promoted; and also at the expense of the serfs, who rose in an abortive rebellion in 1773.

The Revolutionary and Napoleonic Wars which engulfed Europe from 1793 to 1815 saw Russia become involved in European affairs as never before. These culminated in Napoleon’s invasion of Russia in 1812, his march on Moscow, and his retreat. These events led directly to Napoleon’s defeat, and to Russia’s rise to the status of a great European power.

At home, however, Russia remained backward compared with the nations of western Europe. Politically, she remained an autocracy, and socially she remained wedded to serfdom. The industrial revolution, which was transforming western Europe in the early and mid-19th century, left her almost completely untouched at this time. Efforts at reform came to nothing, especially under the notoriously reactionary tsar Nicholas I (1825-55).

In 1854-55 Russia was defeated by Britain and France in the Crimean War. This created a mood for change, and under Alexander II (ruled 1855-81) some important reforms were enacted. Above all, in 1861, serfdom was abolished, though because the emancipated serfs had to pay an additional tax to pay for their freedom many were left hardly better off than before. Also in Alexander’s time, Russia began at last to experience an industrial revolution of its own.

Russia’s empire continued to expand. Large areas were annexed from the Chinese empire in 1860, and the 1870s saw the Russians defeat the Ottoman Empire and acquire new territory in the Caucasus, and help achieve independence for Bulgaria, Romania and Montenegro. More territory in central Asia was annexed and as the Russian bordered moved up to Afghanistan, rivalry with the British in India developed in the region in a diplomatic confrontation known as the “Great game”.

Although the industrialization of Russia was proceeding at a brisk pace by the end of the 19th century, the huge empire remained backward and poor by the standards of western Europe. The successors to Tsar Alexander II both set themselves against reform. War with Japan (Russo-Japanese War, 1904-5) ended in a humiliating defeat, which was followed by the abortive Revolution of 1905. Divisions amongst the reformers enabled the conservative factions around tsar Nicholas II to regain control, and hopes of a parliamentary democracy were dashed.

Word War I and Revolution

In August 1914 Russia entered World War I, and, having mobilized an enormous army, achieved some initial successes. However, these gains were soon reversed, and mounting casualties as well as severe shortages at home sapped the morale of the people. Lack of progress in the war led the tsar to assume personal command at the front; and continuing reverses undermined his own popularity with the people. The people increasingly turned against the war, and against the ruling class who were so blatantly mismanaging it.

In 1917 a strike amongst factory workers in St Petersburg was the spark which brought Revolution, the abdication of the Tsar, the coming to power of the Bolsheviks, and the murder of the royal family in 1918. A widespread civil war followed, from which would emerged the Soviet Union. This was imperial Russia in a very different guise, and would loom large in the world during most of the rest of the 20th century.