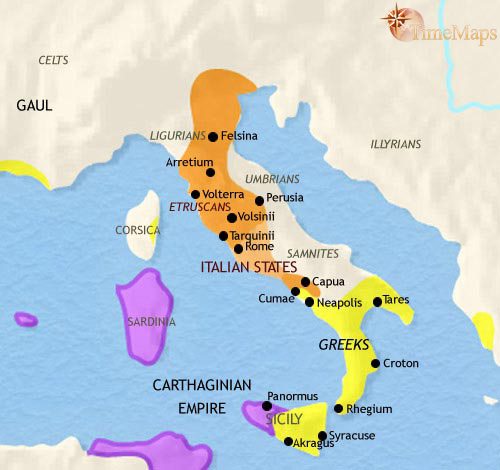 The Etruscan civilization flourished in Italy in ancient times. It is famous for the huge influence that it exercised on the early history and civilization of Rome.

History Time Map of the Etruscans

Etruscan civilization is the modern English name given to a civilization of ancient Italy. Its homeland was in the area of central Italy, just north of Rome, which is today called Tuscany.

In ancient times there was a strong tradition that the Etruscans had emigrated from Lydia, on the eastern coast of present-day Turkey. Modern historians have largely discounted this idea, and believe that the Etruscans were an indigenous population – a belief largely confirmed by modern DNA studies. The sudden flowering of Etruscan civilization at a date earlier than other indigenous peoples of central and northern Italy probably points to the blossoming of strong trading relations between the peoples of the area – identified by modern scholars as belonging to the Iron-age Villanovan culture – and merchants (and possibly some colonists) from the eastern Mediterranean. Mining of metals, especially copper and iron, would have led to early enrichment for the Etruscans, and to a higher material culture than other Italic peoples.

The Etruscan civilization lasted from the 8th century BCE to the 3rd and 2nd centuries BCE. In the 6th century the Etruscans expanded their influence over a wide area of Italy. They founded city-states in northern Italy, and to the south, their influence expanded down into Latium and beyond. Early Rome was deeply influenced by Etruscan culture (the word “Rome” is Etruscan). The Etruscans also gained control of Corsica. 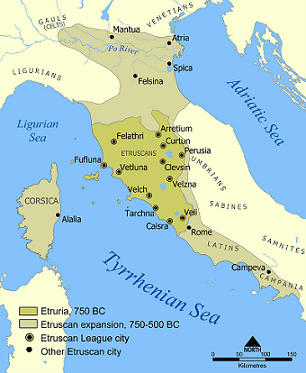 Location of Etruscan Civilization and the city states.
Reproduced under License 3.0

Between the late 6th and early 4th centuries BCE, Etruscan power declined. To the south, the rising power of the Greek city-states of Sicily and southern Italy weakened Etruscan political and military influence, and cities which they had either dominated or founded, such as Rome, threw out their overlords and became independent city-states. In the north, Gallic tribes moved into northern Italy and destroyed the Etruscan cities there. However, in their homeland the Etruscan cities remained powerful, and were formidable opponents of the rising power of Rome. It was only over a long period, in the 4th and 3rd centuries BCE, that they surrendered their independence to the Romans.

The Etruscans spoke a unique language, unrelated to those of their neighbors. Their culture was influenced by Greek traders, and by the Greek colonists of southern Italy. The Etruscan alphabet is Greek in its origins. They in turn passed on their alphabet to the Romans.

The Etruscans adopted the city-state as their political unit from the Greeks, earlier than their neighbors in central Italy. The Etruscan homeland was originally divided into twelve city-states, but new cities sprang up as the Etruscans expanded their sphere of influence.

Like the Greeks, most Etruscan cities moved from monarchy to oligarchy in the 6th century BCE. Some seem to have retained their monarchies.

The different city-states of Etruria were united by a common religion, and apparently too by a loose political confederacy. This did not stop the different states from going to war with one another from time to time.

The Etruscan system of belief was, like those of the Greeks and Romans, polytheistic, based on the worship of many gods and goddesses: Tin or Tinia, the sky, Uni his wife, and Cel, the earth goddess. Later, Greek deities were taken into the Etruscan system: Aritimi (Artemis), Menrva (Minerva), Pacha (Dionysus). The Greek heroes taken from Homer also appear extensively in Etruscan art.

These deities were active in the world of man and could be persuaded to influence human affairs. Legend had it that, to understand the will of the gods, and how to influence them, had been “revealed” to the Etruscans in the form of oracles which were written down in a series of mysterious sacred books. These books were secret, only to be consulted by the priests.

Like other ancient cultures, warfare was a major aspect of their political life. Like many ancient societies, the Etruscans conducted campaigns during summer months, raiding neighboring areas, attempting to gain territory, and engaging in – or combating – piracy. 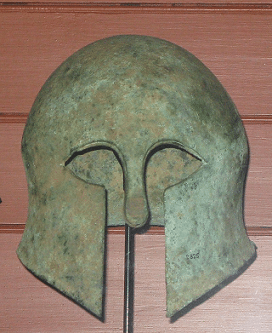 An Etruscan Helmut in the British Museum
http://www.gnu.org/copyleft/fdl.html

Human sacrifice was a feature of their religion, and prisoners of war could end up on the altars of Etruscan gods. As a part of this sacrifice, prisoners were sometimes set to fight one another. the Romans later took this practice over, and it grew into the gladiatorial entertainments of the Roman amphitheaters.

The surviving Etruscan art which has come down to us is figurative sculpture in terracotta (especially life-size tomb statues in temples) and cast bronze, wall-painting and metalworking (especially engraved bronze mirrors).

As with all ancient peoples, Etruscan art was strongly connected to religion; the afterlife was of major importance in Etruscan art.

The Etruscan musical instruments seen in frescoes and bas-reliefs are different types of pipes, such as Pan pipes and double pipes, percussion instruments, and stringed instruments like the lyre. 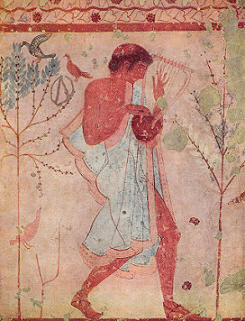 5th century BCE fresco of dancers and musicians, tomb of the leopards

The only written records of Etruscan origin that remain are inscriptions, mainly funerary. Otherwise, Etruscan literature is evidenced only in references by later Roman authors.

The Architecture of the ancient Etruscans was derived from that of the Greeks, and went on to influence that of early Rome.

Rome is located on the edge of what was the Etruscan homeland. Certain institutions and customs came directly from the Etruscans to Rome. In fact, the name of Rome itself has of Etruscan origin, as are the names of its legendary founders, Romulus and Remus. There were strong Latin and Italic elements to Roman culture, and later Romans proudly celebrated these multiple origins. Before the Etruscan arrived (undoubtedly as a ruling group), however, Rome was probably a collection of small farming settlements. The Etruscan elite provided it with its early political arrangements (monarchy, army) and urban infrastructure (walls, forum, drainage system); in short, it was probably they who turned Rome into a full-blown city-state.

Few Etruscan words entered the Latin language, but those that did tended to be to do with state authority: the toga palmata (a magistrate’s robe), the sella curulis (magistrate’s chair), and the fasces – a bundle of whipping rods surrounding a double-bladed axe, carried by magistrate’s attendants (lictors). The fasces symbolized magisterial power. Also, the word populus is of Etruscan derivation, and originally referred to the people assembled for war, as an army, rather than the general populace.

The early Romans were deeply influenced by their more civilized Etruscan rulers, whose imprint can be seen in the Romans’ writing, art and architecture, religion, military matters, entertainment (as in the gladiatorial combat) and probably a host of other aspects of daily life. In thus helping to shape Roman civilization, the Etruscans had an enduring influence on later Western culture.

The Greeks in Italy

Map: Ancient Italy at the height of Etruscan civilization, 500 BCE